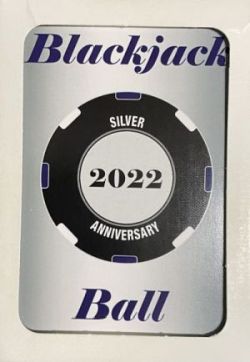 On October 1, 2022, the annual Blackjack Ball was held once again in Las Vegas.  This was no ordinary Blackjack Ball!  Max Rubin, Richard Munchkin and I am sure others on the Ball committee pulled out all the stops for this event.  This is the one big yearly event that professional blackjack players, advantage play experts and authors gather to reconnect, renew old relationships and create new ones. It is an honor to be invited!

The last Blackjack Ball was held in February 2020, just before the pandemic hit.  Unfortunately, the Ball was canceled in 2021.  This year had to be extra special as it was the 25th Silver Anniversary!  So, a decision was made to hold the event at the coolest building in Las Vegas – the Lou Ruvo Center for Brain Health, which looks like a bombed out building from the outside.  Inside is an amazing ballroom where 180 attendees could mingle, eat, drink and dine all night. This was a black-tie preferred event and cost for the event was between $250 and $10000 (depending on what you wanted to contribute).  Also, you didn’t have to bring a bottle of fine champagne this year.  All champagne was contributed by Luc Belaire.

On March 15, 2022, the Blackjack Hall of Fame became a 501c3 non-profit corporation which now allows the Blackjack Ball to have a charitable purpose.  The plan, going forward, is to donate monies collected at the Ball to a new charity or cause each year.  This year, the cause is the UNLV Center for Gambling Studies and Health.  It is estimated that over $25k will be donated to this cause in 2022.

After arriving at the Ruvo Center around 6pm you are directed to the outside garden where cocktails and appetizers are set up and the mingling begins.1)I was lucky to even make this event as my flight out of Florida was canceled twice due to hurricane Ian.  Fortunately, I was able to catch a flight on the day of the event and made it just in time.  As people gathered in the garden some of us were mesmerized by card expert Jason England who baffled us with cheating moves and explained how some of the classic cheating devices he brought worked.  One thing is certain!  The untrained eye won’t catch many classic cheating moves.  Also, if you walked around the garden you could find framed newspaper pages from the 1960s depicting articles on blackjack and casino cheating.

Then, around 7:30pm, we all moved inside for a wonderful gourmet dinner and dessert.  The evening consisted of several planned events including the usual “Calcutta” where guests bid to wager on the players who they think will win the coveted Grosjean Cup.  The bidding during the Calcutta ran into the thousands of dollars for some groups of players.

Unfortunately, Ed Thorp didn’t make it this year, however, he presented a video that we all watched on the big multi-media screens.  Essentially, he said that due to his age (he is now 90) and circumstance, he had an 18% chance of dying if he caught Covid.  That convinced him to pass this year.  However, in honor of Thorp’s contributions, it was announced that the Blackjack Hall of Fame members would start an Ed Thorp Lifetime Achievement Award which automatically also gets you in the Blackjack Hall of Fame.   This year’s special honoree was Blair Hull, who was instrumental in setting up the 501c3 non-profit status.

General voting also occurs for the Blackjack Hall of Fame.  The ballot nominees, this year, were Cat Hulbert, Colin Jones, Maria “The Greek”, Mark Billings, Norm Wattenberger, Rick Blaine and Robert Loeb.  After all the ballots were collected, the clear winner was Cat Hulbert who sadly passed away this year.  Here is a little information about Cat from the Blackjack Hall of Fame committee:

Cat was selected as one of BBC’s 100 Women of 2016 – an honor given to “high profile women from the spheres of entertainment, sport, business and politics.” Chosen for being the first woman to break through the glass ceiling of professional blackjack in 1978, she played on the Czech blackjack team in over 300 casinos world-wide and was the first woman to ever amass a million dollars across the blackjack tables. Cat’s aggressive play and fearlessness changed many opinions on the mathematical and emotional capabilities of women to bet-it-up and win under pressure.

Selected by Card Player Magazine in 1996 as one of the best and smartest card players in the World, she was one of only one of eight professional gamblers to be included in Richard  Munchkin’s book, Gambling Wizards. Along with teaching a woman’s only poker class for many years at the Hollywood Park Casino, Cat also wrote Outplaying the Boys, a humorous book & guide for women published in NYC in 2005 teaching ladies how to become more competitive in life and at the tables.

Cat was featured in LA’s The Daily Breeze and the Sunday LA Times for her top- notch card playing abilities in blackjack and poker. Also a contestant on Blackjack’s Tournament of Champions, Cat has been a guest on numerous radio shows including NPR, Gambling with an Edge, and BBC’s The Conversation; often sought out due to her unusual successful life choices and her mission to change how women are viewed – by men and by themselves alike. On December 7, 2016, the BBC published a biographical article based on her remarkable exploits that’s said to have received a million reads the first day it appeared on their homepage.

Now on to some fun stuff… the test for the World’s Greatest Blackjack Player and the Grosjean Cup!  Some of us study for weeks.  Others are so knowledgeable that they often make the top 10.   These test questions are tough.  Some questions have nothing to do with blackjack.  Some are multiple choice.  Others, you have to fill in a blank.  There are strict rules.  All questions must be answered.  Leave something blank and you are disqualified.  Change an answer and you are disqualified. This year, Anthony Curtis made the highest score with 12 correct out of 21 questions.

But you don’t win simply by getting the highest score on the written test.  Subsequent tests included estimating the number of cards in the discard tray, cutting cards in a deck to force a card to the dealer, naming an Indian casino in each state, memorizing as many cards as you can and counting down a deck.

Well, when all the dust settled, Darryl Purpose and WRX made it to the top two.  Counting down a deck was the contest.  Results were based on speed and accuracy.  Darryl Purpose was in his element here as he is often credited to be one of the fastest counters on the planet.  His claim to fame was being able to count a deck of cards in 8 seconds flat.2)Darryl would admit, however, he had to use a special tactic to get to a 8 second count.  He would count normally until the last 15 or so cards.  Then, he would attempt to take a mental picture in his head of the last group of cards and say stop!  By the time he was asked what the missing card was he had counted the last cards from his memory.  See poll!  Well, he didn’t break his record here as his only goal was to win and indeed he did.  WRX, however, gets the second place trophy called the Munchkin Award.

For additional details on this year’s Blackjack Ball be sure to listen to the Gambling With An Edge podcast. 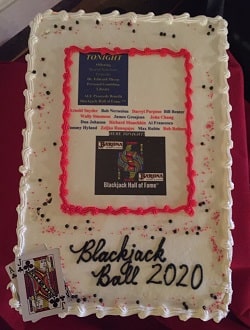 On February 22, 2020, the 24th Blackjack Ball was held in Las Vegas. I was privileged and honored to be one of the approximately 100 attendees. This is the one big yearly event that professional blackjack players, experts and authors gather to reconnect, renew old relationships and create new ones. It is an honor to be invited!

The very first Blackjack Ball was held in 1997, by casino executive and advantage player Max Rubin, who called it “… a double secret party that pits the world’s most dangerous blackjack players in a battle for the coveted ‘Blackjack Cup’ “. Each guest is required to bring one chilled bottle of premium champagne to get past the security at the door and starting in 2019, each guest must also pony up $100 to seed what is called the “Calcutta” and provide funds for future Blackjack Balls and the Blackjack Hall of Fame. Beginning in 2017, long-time advantage player Richard Munchkin began co-hosting the event.


The Blackjack Ball begins with two hours of cocktails and mingling. Then, a dinner is served and betting is done on who thinks will win the coveted Grosjean Cup and title of the “World’s Greatest Blackjack Player“. Voting is done for nominees into the Blackjack Hall of Fame and finally, an incredibly hard 21-question test is performed to determine the five finalists who compete in a skills competition on a blackjack table. This year, Arnold Snyder, former publisher of Blackjack Forum magazine, snagged the Grosjean Cup award and the owner of his team won $14,030!


Well, they also have a secondary prize for the runner-up. They call it the Munchkin Award (after Richard Munchkin of course). This year, an individual that goes by the name Dunbar won it. Actually, Dunbar is the author of Dunbar’s Risk Analyzer for Blackjack.


All of this is sponsored by the Barona Casino in San Diego. Yes, a casino sponsors the event. The reason is that each player who attends the ball agree to never play blackjack in their casino for life. Also, the Barona offers a “lifetime comp” consisting of free room, meals and beverage to all inductees into the Blackjack Hall of Fame, as long as they agree to never play blackjack at Barona.

This year we had the honor of the following Blackjack Hall of Fame inductees in attendance: