Gambler’s Anonymous. An organization founded in 1957 designed to help compulsive gamblers and fashioned after Alcoholics Anonymous. The reader is encouraged to contact this organization if you ever find yourself unable to cope with gambling. Compulsive gambling is a hidden and progressive illness and should be treated as so. Write PO BOX 17173, Los Angeles, CA 90017 or call (626) 960-3500.
[ gamblersanonymous.org/ ]
[ gam-anon.org ]
[ 86 Mannuzza Understanding Blackjack 89 ]
[ 8/91 Good …9 Warning Signs… WIN 58 ]

Gambler’s Book Club. (GBC) One of the oldest gambling book stores in Las Vegas. Also known as the Gambler’s Book Shop. John and Edna Luckman founded the GBC in their home in 1964, as a hobby.  Since then, and for 45 years, the GBC could be found on Charleston and 11th in Downtown Las Vegas.  Practically every Las Vegas card counter (or wanna-be card counter) has visited this establishment over the years. In 1979, Luckman hired Howard Schwartz who inherited the store from Edna Luckman after her passing in 2002.  In 2014, Avery Cardoza purchased the Gambler’s Book Club/Shop and merged with the Gambler’s General Store in Downtown Las Vegas.
[ ]
[ Wiki: Gambler’s Book Shop / GBC_Press ]
[ Archive: Gamingtoday.com ]
[ gamblersbookclub.com ]


From the “original” Gambler’s Book Shop on Charleston and 11th

Gambler’s Book Shop. (GBS) An alternate name, registered in 1988, of the Gambler’s Book Club, to reflect its retail brick and mortar business.


Gambler’s Choice. (GC) (c1992) ??? A game option that was available in one or more Northern Nevada casinos.

gambler’s fallacy. The mistaken belief that, if something happens more frequently than normal (e.g., black comes up 10 times in a row in roulette), it will happen less frequently in the future.
[ Wiki: Gambler’s fallacy ]
[ Blackjack Apprenticeship video on Gambler’s Fallacy ]

gambler’s ruin. A classic probability problem that asks the following questions: What is the probability that a gambler is ruined and what is the expected duration of the game? Allan Wilson presents the following equation that estimates one’s ruin probability for a bankroll of a units when one is trying to double his bank:


gambling. What card counters and advantage players try to minimize!

Gambling with an Edge.  A weekly radio podcast that premiered on Feb 3, 2011 on KLAV radio (1230 AM) in Las Vegas.  The show initially started with co-hosts Bob Dancer and Frank Kneeland who were both video poker experts.  Other hosts included The Wizard of Odds Michael Shackleford and currently, blackjack and backgammon expert Richard Munchkin is now a co-host with Bob Dancer.
[ Gambling with an Edge ] [ wizardofodds.com archives ]

game(s). A reference to any game played in a casino including roulette, craps, baccarat, blackjack, etc.  See calculators, games and wheels.


game control. Actions made by a dealer or casino personnel to control the casino’s bankroll. Card counters often refer to some of these measures as heat. Game control measures can include:


Gates, Robert W. (aka Bob Gates) Publisher of the Blackjack Monthly newsletter from from 1987 – 199?.  Provided good reporting of blackjack conditions in Nevada and Atlantic City and was very useful for lower stakes players of this era. This traditional style blackjack newsletter also included monthly articles and information on gaining an edge in this game.  NOTE: It is uncertain, but Robert Gates may have actually been Richard Canfield aka Joe Hinton. ???  Anyone know?  Let me know.

George. 1) A slang term for a player who tokes extremely well. A George is often referred to as a live player as in we have a live one here. 2) Code name for one of the concealed blackjack computers used in the late 1970’s by Ken Uston’s team and developed by Keith Taft. George, a perfect-strategy computer, was about half the size of a pack of cigarettes and was powered by batteries. An output “tapper” buzzed to provide the player with information. The input device was a series of switches built onto a plastic mounting that fit around the thigh and fastened by a bandage. See David.
[ 84 Snyder BJF  ]
[ 86 Uston Ken Uston on Blackjack 74 ]
[ blackjackinfo.com ] 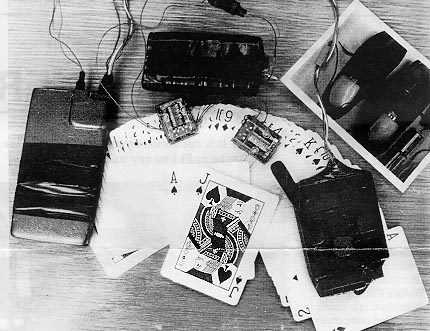 ghost tells. Term coined by Steve Forte to refer to any tells that have been picked up from a dealer’s reaction to another player.
[ 86 Forte Read the Dealer 31 ]

going south. As in to go south with it. A slang term meaning to put money (chips) into one’s pocket.  If you are a card counter or even a rated or credit player, it is generally not a good idea to get caught doing this.  My advice is, if you must pocket chips, don’t make a secret of it!  When you go to the casino cashier and your chips are over some threshold (e.g., maybe $1000… maybe $5000) they will often ask you where you were playing and often call the pit anyway to verify.

Gollehon, John. (Jul 21, 1946 – Jun 20, 2018) According to Cardoza Books, John Thomas Gollehon was a million-selling author of more than two dozen gambling titles including the book All About Blackjack.  He is most widely known as a gambling book publisher.  Gollehon passed away in 2018 at the age of 71.
[ OBITUARY ]

goose neck. A term coined by Steve Forte to refer to a tell when the dealer leans in, or goose necks, to see your hand.
[ 86 Forte Read the Dealer 19 ]

Gordon, Edward.  (July 12, 1923 – Sept 2, 2004) aka D. Howard Mitchell.  Author and developer of the DHM card counting systems.  According to Gordon, “D. Howard Mitchell is nom de plume.  The D. actually stands for Dad because Howard and Mitchell are my Son’s names since they have played significant roles in the Systems Development effort.  Edward Gordon has a M.A. in Math and a PhD in the Applications of Mathematics and Probability Theory“.  Gordon completed his graduate work (MA in mathematics and a PhD in economics) in Southern California.  Gordon taught mathematics and economics part-time at a variety of colleges, and just prior to his death, at age 81, had been hired to teach an undergraduate course for the economics department of UNLV.  See DHM.
[ Optimum Strategy in Blackjack: A New Analysis ]
[ 78 Mitchell Gambling Times:  Blackjack Systems From Basic Strategy to Expert ]
[ OBITUARY: Reviewjournal.com ]


gorilla BP. Term coined by Ken Uston to describe a non-counting player who receives signals from a counter. He’s a gorilla because he doesn’t have to know how to win at blackjack, yet he is playing with an edge over the house. See BP.
[ 81 Uston Million Dollar Blackjack 318 ]

Charles Gorson. (1951 – Oct 4, 2007) aka Big Chuck Gorson because he stood 6 feet 8 inches tall.  One of the colorful characters of the blackjack tournament world. Winner of the $50,000 blackjack tournament at the Aladdin Casino in Las Vegas, on October 18, 1989.  Gorson was a participant on the first episode of the Ultimate Blackjack Tour on CBS.  Gorson died in 2007, after a brief battle with cancer.  He was only 56.
[ BIO ] [ BIO ] [ World of Winners Blackjack video ]

grave shift. Also called graveyard shift. The last, early morning shift of a casino usually beginning between midnight and 5 AM.

gray.  A reference to a $5000 chip but colors vary for this denomination.

Greek Team. (aka The Greeks) TBD. See Maria “The Greek”.

Griffin, Peter A. (July 19, 1937 – Oct 18,1998) Author of the classic text-book Theory of Blackjack and several counting systems. This book is considered the bible on the mathematics of the game and includes a complete discussion of basic strategy and card counting systems including single and multi-parameter. The concept of a card counting system betting correlation (BC) and a playing efficiency (PE) were developed by Peter Griffin. In 2003, he was inducted into the Blackjack Hall of Fame as a theoretical pioneer. Peter Griffin died from cancer at the age of 61 on Sunday, Oct. 18, 1998. See Reports and Studies.
[ BlackjackHallOfFame.com ]
[ Wiki: Peter A. Griffin ]
[ Archive:  blackjackbomb.com ]
[ 12 BJC Dec 98 ]
[ Mar 98 BJF 17 ]
[ nytimes.com ]
[ PHOTO: Peter Griffin 1937 – 1998 ]

grind. A slow and hard way of making money.

grind joint. One of many casinos with a high proportion of slot machines and low-stakes tables.

Grosjean Cup.  Prior to 2009, they used to call this the “Blackjack Cup“.  See Blackjack Ball for details.

Grosjean, James. aka Jesse Morgan. A computer analyst, professional player and author of the classic book Exhibit CAA: Beyond Counting, who successfully sued casinos and the Griffin Detective Agency.  Regarded by many as the “best blackjack player on earth*“. Grosjean is a graduate of Harvard University with a Masters degree from the Univ of Chicago School of Economics.  A 2006 member of the Blackjack Hall of Fame.  Grosjean won the 2004, 2007 and 2008 “Blackjack Cup” at Max Rubin’s Blackjack Ball.  See Michael Russo.
[ BlackjackHallOfFame.com ]
[ Wiki: James Grosjean ]
[ Posts by James Grosjean ]
[ web.archive.org: blackjackbomb.com/james-grosjean/ ]
[ * maxrubin.com ]
[ beyondnumbers.lvablog.com ]
[ 21 Snyder Radical Blackjack 263 ]
[ Archive:  BeyondCounting.com ]

Grossman, Howard. (May 30, 1945 – April 29, 2011) Founder of the Las Vegas Blackjack Academy, a school for card counters.  Grossman was a professional blackjack player for many years and was an original teammate of Ken Uston.  In the 1980s, he began to work for Las Vegas casinos as a consultant and card-counter catcher while also publishing several good instructional videos on blackjack. Grossman was also the inventor of Super Fun 21, as well as other lesser-known table games.  See Howie’s Angels.
[ Wizard of Vegas ]
[ Archive: Blackjack Luck ]
[ Archive: Blackjack Forum Online ]
[ OBITUARY ]

GUT.  {BS} Acronym for Grand Unified Theory of Basic Strategy, a concept proposed by James Grosjean and Previn Mankodi.   The GUT answers the question, “At what additional wager amount will doubling produce the same expectation as not doubling?“.  The GUT requires knowledge of the expected return for every play.  See Scavenger Blackjack.
[ Archive: blackjackforumonline.com ]
[ wizardofodds.com ]


Gwynn, John M. Jr. (Dec 29, 1932 – Jun 5, 2001) John Gwynn earned his PhD in mathematics and would become a Professor of Computer Science at California State University, for 24 years.  Gwynn authored numerous papers on gambling theory and devoted many hours of his life during the 80s and 90s analyzing and testing systems and strategies for publications like Blackjack Forum.  John Gwynn died of an apparent heart attack in 2001.  See Reports and Studies.
[ catlin.casinocitytimes.com ]
[ Fall 2001 Snyder BJF 113 ]