earring. {CHS}. Also called a hanger. To deliberately not drop currency all the way into a table drop box, so that one corner sticks out. This allows the paper money to be easily retrieved at a later time.
[ 80 Solkey Dummy Up and Deal 112 ]

eating cards. {CS}. To spread to multiple hands and/or to intentionally take extra cards in order to gain more information to play the next hand or to set up a special situation.  This could be done with small bets in minus counts or if the player has already exceeded 21.   See end-play.
[ 81 Uston Million Dollar Blackjack 316 ]

edge. 1) The advantage held by the player or the house and typically presented in percent form. See house advantage. 2) As in the edge of a card.

edge sorting. A technique used in advantage play where a player determines whether a face-down card is likely to be low or high at casino table games by observing and exploiting subtle unintentional differences on the backs of some types of playing cards. In some games, the player must persuade the dealer to cooperate by unwittingly “sorting” the cards into low and high.  This practice of card sorting is referred to as the “the turn” or “sorting the edges”.
[ 25 Jacobson Advanced Advantage Play 25 ]
[ Wiki: Edge sorting ]
[ ibtimes.com ]
[ apheat.net ]
[ 888casino.com ]
[93 Wong Blackjack Secrets ]
[ 21 Snyder Radical Blackjack 214] 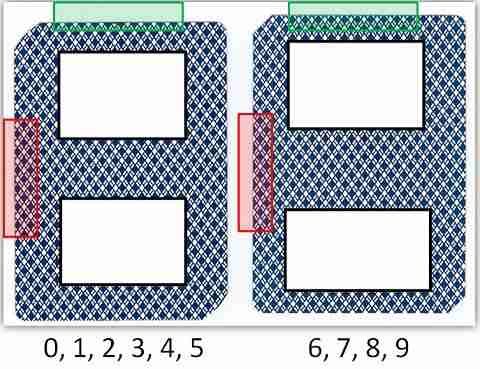 Eliot Jacobson describes what edge-sorting is all about

effects of removal. (EOR)  Generally a reference to the mathematical effects of the removal of a single card from a pack of cards.

From Peter Griffin’s book The Theory of Blackjack

eighty-six. To bar a person from a casino or from playing a game.

Einiger, Ken.   (Born 1960) Blackjack tournament expert and author of the book Play to Win.  Einiger won the 2005 World Series of Blackjack and was a featured player on the CBS’ Ultimate Blackjack Tour.
[ web.archive.org: blackjackbomb.com/ken-einiger ]

Einstein, Charles.  Author of the book How to Win at Blackjack originally written in 1969 and developer of the Einstein count.

ein-und-zwanzig. The game of blackjack as known in Germany. See achtzehn-und-drei.
[ 66 Thorp Beat the Dealer 4 ]

El Burro.  TBD  The website persona for a well known Las Vegas professional blackjack and advantage player.  His real name was Enrique Pena (Ricky) Velasco who passed away at the early age of only 28 in 2003.
[ Obituary ]
[ The Win-Rate of the Average Blackjack Card Counter ]

element of ruin. The likelihood that a player or team of players will lose their bankroll. Usually expressed in percent form. In 1981, Ken Uston wrote that his blackjack teams always used a 5% element-of-ruin, which meant that his team’s bets were calibrated to yield a 19-out-of-20 chance of doubling a bank and a 1-out-of-20 chance of going broke. See gambler’s ruin.  See element of ruin. See Kelly Criterion.  See risk of ruin.
[ 81 Uston Million Dollar Blackjack 126,318 ]
[ 3/93 Schlesinger Risk of Ruin BJF 3 ]


end play. {CS}. A strategy that can usually be executed only in the last few cards of a deck. As most card counters know, the deeper a dealer deals into the deck or shoe the more accurate measure a player’s card counting system will be. Nearly all casinos cut out some of the cards at the end of a deck or shoe to prevent knowledgeable players from using this very profitable strategy. End play is the method of forcing the dealer to run out of cards and thus requiring the dealer to deal the rest of the round from the shuffled discards.    See cut card.
[ 66 Thorp Beat the Dealer ]

EOR.   Acronym for effects of removal.

Epstein, Richard Arnold. (aka E. P. Stein) (March 5, 1927 – July 5, 2016) Game theorist and author of the book The Theory of Gambling and Statistical Logic which included an exhaustive treatment of blackjack theory.  Epstein had a Ph.D. in Physics from the University of Barcelona and worked extensively on various U.S. space and missile programs. He was also a consultant to casinos in Greece and Macao.
[ Wiki: Richard Arnold Epstein ]
[ Wayback Machine Archive ]


Erb, Bill.   A previous nominee for the Blackjack Hall of Fame.  Al Francesco has named Bill Erb as one of the two greatest players he has ever worked with, both in terms of creativity and sheer amount of money won.
[ bj21.com ]
[ blackjackforumonline.com ]

errors. Errors can be made by the dealer or player.   Common errors that dealers frequently make and that may be exploited by sharp players include the following:

Depending on where you play, mistakes in payoffs can be common, especially if the dealer is tired or the dealer is a novice. This author estimates that dealer errors may contribute to as much as 0.05 – 0.2% to a player’s overall advantage in the game. Of course, this estimate assumes that the player catches all those mistakes that a dealer might make that would favor the player.  In this author’s opinion, player errors are the greatest contributor to the downfall of most card counters.

According to Peter Griffin, there are two types of error in employing a card counting strategy.  One has to do with an inaccurate running count / true count conversion.  The other has to do with an imprecise knowledge of the proper critical index number for changing strategy.
[ 91 Demos Casino Supervision: A Basic Guide 93 ]
[ 92 Wong Basic Blackjack ]
[ 93 Dalton BJR 14 ]
[ 88 Griffin Theory of Blackjack 97 ]

In England, you must be a member to be admitted in a casino. At many casinos in England there is a fee for joining. You must apply for membership at least 48 hours before you wish to play.

European Blackjack.  A game with European rules.  See below.

European rules. 1) (ENHC, NHC) Also referred to as no-hole-card rules. This is a reference to the rule (as seen in many European casinos) that requires the dealer to wait until after the players have played out their hands before taking a hole-card. This, in itself, is not a reason to change basic strategy, however, since the dealer also keeps all double down and split hand bets if he has a natural, a variation to basic strategy is required. See basic strategy section.   2) In general, the following rules apply in many European countries:

even money. A phrase that the player may state or the dealer may ask, if the player has a blackjack and the dealer has an ace as an up-card. If the player agrees to even money he will be paid the amount of his wager before the dealer checks his hole-card. This is essentially the same thing as the player insuring his blackjack. Like insurance on any other hand, you should not take even money unless you are counting cards.

Exchange Blackjack. (c2004) A online blackjack variation where players bet against each other.  Michael Shackleford likens it to a “stock market on a blackjack game“.
[ wizardofodds.com ]

expectation.  The theoretical outcome per wager and a measure of how much the player (or casino) can expect to lose (or win) in a particular game based on the handle.  This measure (generally expressed in dollars or percent) is based on the player’s statistical advantage or disadvantage.  An example of expectation for a fixed game such as American roulette would be -5.26% for a 1-unit wager on black or red. See expected value below.


expected value. (EV) 1) Same as expectation and often used interchangeably with the term advantage. 2) Same as expectation but including the additional value from comps earned during play.  See actual value.  See a-win.
[ Expected Value of an Advantage Blackjack Player ]


expected win. (EW) Same as expectation but generally a representation of X dollars per X number of hands.

Experiment. aka “The Experiment” or “The Early Surrender Experiment”. A reference to the 13 day period (January 16-30, 1979) when Resorts International Casino in Atlantic City offered early surrender and card counters could play unhindered at their blackjack tables.  It is reported that several teams took advantage of this rule including the Czech team, Ken Uston’s team and Tommy Hyland’s team.  Later that year, on December 1st, the New Jersey Casino Control Commission ordered all Atlantic City casinos to permit card counters to play blackjack again.  Thirteen days later, the rule was rescinded again.  See Black Tuesday.
[ 2012 Snyder The Big Book of Blackjack 82 ]


The “Blackjack Experiment” – From BlackjackApprenticeship.com

Extreme 21. (c2005) A blackjack variation in which the players play one at a time and the dealer keeps hitting until he beats the player or goes bust trying. Players can double on any number of cards, hit after double, redouble and a total of 21 always wins. Blackjacks pay even money.  (HA ~ 1.16%)
[ wizardofodds.com ]


eye. 1) A reference to the security cameras in a casino.  See eye-in-the-sky below.

eye-in-the-sky. Also called sky. A reference to the area above the main casino where play is observed through one-way mirrors or cameras. See catwalk.