Editor Note: This page is for historical purposes only.

This information is compiled from casino brochures and the like. Click on the small images to see a larger image.

Hotel Conrad and Jupiters Casino are located on a small island (Broadbeach Island), Gold Coast Highway, Broadbeach. Jupiters is Australia’s third largest casino, with about 110 tables (including about 20 roulette tables) and some 1000 machines, attracting 16,000 visitors per day. They have one bank of 20c progressive jackpot video poker, down from four banks a year ago.

Jupiters runs several blackjack tournaments every year.I entered the “War of Nerves” tournament for the first time in July 1995,and the Ultimate Challenge in November 1995. In both cases, I came second in the first heat, and first in the second heat, and bombed out in the semi final. I would be interested in hearing from other tournament players,and any information about tournaments offered by other casinos.

In October 1998, Jupiters revamped its international showroom. The seating is now more like that of a cinema. The first show in the new format is called “Inneuvre”, and I found it stunning. It is a mixture of dance, trapeze artists, music, gymnastics, and more. Box office: (07) 5592 8303.

January 1999: Jupiters has followed Treasury in dumping Video Poker.This time, it is one of the 20c bank that has disappeared from Jupiters.Two years ago, Jupiters had four banks of Video Poker; two of 20c and two dollar banks. Apparently, the Jupiters management believe that people don’t notice the fact that relatively good machines like Video Poker (approx.4% house edge, depending on the skill of the player) are being replaced by mindless slot machines (house edge must be 10% or less by law; the vast majority are set at over 9%). “No-one ever went broke relying on the stupidity of the customer” seems to be the management strategy.

See also the Castaway’s Travel page (with online reservations), Australian Travel Association page, and the Table has turned for Jupiters.

Below: two views of Hotel Conrad and Jupiters Casino, and the entrance to Club Conrad.

The Conrad Treasury Casino opened its doors in April 1995. It is housed in the old Treasury building, George Street Brisbane, near the Victoria bridge. The operators, Conrad Hilton, have refurbished the building, and are supposed to have made the casino fit into the feel and style of the building. To my mind, they have only partly succeeded, since the noise,smoke and vibrant colour of the casino just seem to clash with the charm and character of the building. (I don’t even especially like old buildings!)That said, and given what they had to work with, its not too bad. I guess it was the cheapest option for the government, stuck with a building on the heritage list.

Treasury has about 100 gaming tables (including about 45 blackjack and 20 roulette tables) and some 1150 gaming machines,split over two floors (plus VIP and invitation only areas on upper floors),after the recent remodeling. It attracts some 12,000 visitors per day.They now have no Video Poker at all. The nearby Lands Administration building (of similar vintage, early 20th century)has been converted into the Conrad International Hotel.

The vast majority of machines include note acceptors now.

The end of 1998 brought the end of an era: the last clunky $1 Video Poker machines were removed.With them has gone the last reason for me to visit Treasury, so it’s goodbye. When Treasury opened,there were three banks of video poker machines (well, four, but two shared the same jackpot). These were the only machines in the casino where any skill was involved. Now, almost all the machines are of 5c denomination(but you can play tens or even hundreds of credits each game), all essentially the same, and all made by Aristocrat. I estimate that less than 5% of the machines at Treasury are by any company other than Aristocrat. They sure seem to be the flavour of the year.

I really feel that Treasury has made a big business mistake here. Everybody identifies with Draw Poker; everyone knows about Jacks, Aces, and Diamonds; playing cards have been around for at least 200 years. Incredibly, Treasury have apparently not explored the option of multi-game machines. They even had a few multi-game machines, and only loaded one game on them. If it is true that more people prefer the fancy new games, then why not bring out machines that have fancy games and traditional poker games in one machine? Poker players will appreciate the updated machines with note acceptors and sharp screens (Treasury had allowed the Draw Poker machines to deteriorate for a year or more), and they can still have the extra revenue from the new games, that are supposedly better for the casino’s profits. Personally, I think that the machines would still have to be linked to a progressive jackpot meter to achieve the same following as the 20cDraw Poker machines had. Treasury already have a bank of mixed machines connected to a progressive jackpot, so it is obviously achievable. 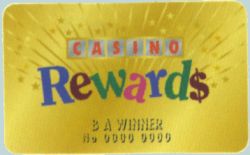 This is the name of the slot club for Jupiters and Treasury; it supersedes the old Jupiters and Treasury player cards. The same cards are used to rate table play; you hand your card to the floor manager when starting table play. Gaming machine play earns “bonus dollars” that can be redeemed for cash or meals, gift shop item, etc. Note that rewards for table play, while based on action, is at the discretion of the floor persons. Although they use your Casino Rewards card to identify you and keep track of your complimentaries, table and machine rewards are separate. Exceptional machine play may earn complimentaries in addition to bonus dollars. There are three levels of the card: white, silver, and gold. The gold card includes 5 nights per year of free accommodation, a meal and gift on your birthday, show tickets,access to Club Conrad facilities, and so on.

The casinos seem reluctant to publish the rate at which machine play earns bonus dollars. From observations and experiments, it seems that the white card (and the old players cards) earned 0.5% of action, so for every$2 wagered, you earned one bonus cent. The silver and gold cards claim an extra 20% over the white card, and indeed it seems that these cards earn 0.6% of action. This is good, and compares with the best of Las Vegas.It is easy to get a silver card: you just need to earn 30 bonus dollars;gold cards are much harder: you need 1100 bonus dollars in a 12 month period.Thus, you need about $183,000 of machine action in one year to rate a gold card. (Note: you don’t have to spend that much, just put that much into action! This would cost the typical (non expert) player about $15,000).  So gold cards are for very serious players! However, the expert video poker player could earn a gold card in about 3 royal flush cycles (20cmachines), or just over one royal cycle ($1 machines).

The Reef casino is in financial trouble. As of late April 1997, the Australian Tourism Group and Malaysian casino operator Metroplex, are tobuy its licence from Casinos Austria and inject $40M into the project.This is likely to satisfy the bankers. The Australian Financial Review newspaper has an article titled Reef on a losing Streak.

As of July 1997, the new owners are taking over; shares bottomed recently at 10c each (down 90%). Hopefully, things will improve from here on.

Sheraton Townsville hosts regular high stakes blackjack tournaments. It is the smallest of Queensland’s casinos, with about32 tables and 274 gaming machines. They have $1 and $2 progressive jackpot video poker.

December 1997 saw a $12M refurbishment, with new restaurants, bars,air conditioning and air quality systems, and a TAB. It is now claimed to be the first fully themed casino in Australia. The new Stateroom isa plush room with higher minimums and a higher dress code than the general casino (but it’s open to everyone).

More gaming machines are on the way. Personally, I hope that the trend towards “random cash jackpots” does not catch on. That’s because I enjoy playing with an advantage, and it doesn’t cost the house anything. With a random jackpot, you never know if you are playing with an advantage.A few high jackpots in a row could cost the house dearly, and they are unattractive to the smarter player (who makes just as much, perhaps more,as regular players).

Australia’s newest casino, “Star City”, opened on the 26th of November,1997. It has over 200 tables, 1500 gaming machines, and a large sports lounge. There is parking for 2500 cars. It is a pretty casino, with many Australian themed areas (e.g. Reef, Desert, Tree, etc). It is located in the foreshore of Sydney Harbour. They have 2 aquariums totalling 50,000litres of sea water that they claim will establish to a genuine coral ecosystem by about mid 1998.

Despite the 1500 gaming machines, the only video poker available (as of December 1997) is called “Wild Card”, available only on some $1 “MultiStar” machines. It is a weird variation on standard Joker Wild VP, similar to a game that you can play in pubs throughout the state. Video Poker Tutor gives a return for this game (playing 10 coins,or $10 per play) of under 93.6%! None of the other machine games have progressive jackpots, and most 10c games appear to have a return in the very low 90s(e.g. “Penguin Pays” is 90.4%). All slot machines have note acceptors.  Most machines are of 10c, 5c, or $1 denomination, with just two busy banks of 2c machines.

Onmy last visit, I saw no Keno, but all the usual table games were there,including “Let it Ride”, “Caribbean Stud”, and “Pai Gow Poker”, all with high minimums (all Caribbean Stud that I saw were at least $15). Most tables have easily seen signs showing the table minimum; you need this to find your way around. All tables were open, and conditions were already quite crowded, on a Saturday afternoon. The “Coral Room” opens in busier times,and is totally non smoking. It has about 50 games of various denomination,a handful of 2c and 5c slot machines, and a higher dress code than the rest of the casino. Ideal for players trying to escape the smoke and some of the bustle of the main gaming area.

See also (nothing about the new casino yet), and the Sydney Entertainment and Events page.

The Crown casino opened on the 9th May 1997. It is the largest in the world(measured by number of gaming tables), with 350 tables and 2500 machines.Some of the features of the South bank Complex:

All games will be structured limit and for the higher stakes players pot limit will be available on request. Crown are running some poker tournaments now; see my tournament page for details.

See also the Crown web page, not to be confused with the American CrownCasino Corporation page.

Visitor numbers are expected to climb to well over 25,000 per day. It is already quite crowded at peak times.

Wrest Point was Australia’s first casino, having opened on 10th February,1973. It has 33 gaming tables and over 490 machines, and the hotel has278 rooms. It has its own web page. Wrest point hosts regular high stakes blackjacktournaments.

The Burswood Casino in Perth, West Australia. It attracts around 9000 visitors per day, and has over 1000 gaming machines. The hotel has 414 rooms.

Burswoodhas its own web page.

Adelaide Casino is housed in an elegant old building in the heart of the Adelaide Central Business District. To my mind, they have done a better job installing a casino in this sort of building than have Treasury. They have 80 tables; all the usual games are offered, plus live poker. There are around 800 gaming machines, and a thing called “Royal Ascot” that is an electronic horse race.

Christmas Island is an Australian Territory, not on the Australian continent.In fact, it lies approximately 3300km northwest of Perth. The casino there was closed in June 1998, with unpaid staff causing a riot.

Other Sources of Information

For international casino information, see this section of RollingGood Times Online, or CasinoCity.
The Queensland Office of Gaming Regulation is now online; it has some fascinating information about setting up a casino in Queensland, and some statistics of revenue..