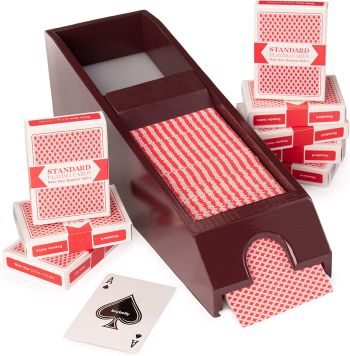 When playing blackjack at home you only need one deck of 52 cards.  However, land-based casinos and live dealer games usually use more decks. Blackjack slot machines can use one or more decks, however, only one round of blackjack is dealt before the computerized shuffle.

What is the significance of these differences?  Does it affect the game rules and/or house advantage?  Are you better off playing in a single deck game versus a game using many decks?

How Many Blackjack Decks Do Casinos Use

In a casino, you can find tables where only one deck is used. But most often, six to eight decks are used. Similar rules apply to real money blackjack at online casinos.

The number of decks used does not impact how the game is played, however, casinos often alter the rules to give them a bigger advantage.  Increasing the number of decks in a game also makes card counting more difficult.

Why the Casino is Increasing the Number of Decks

There are several reasons why land-based and online casinos increase the number of decks in blackjack. Let’s take a closer look at each reason.

Playing with one deck means you will need to shuffle the cards more often and possibly after each new round, which takes a certain amount of time. Time is highly valued in the casino – the game is idle during the shuffle, meaning no money is received. A casino that does not make a profit is a nightmare for any operator.

The introduction of multiple decks eliminates the need for shuffling after the end of each round. There is an opportunity to play many hands before the dealer shuffles the packs.

Bigger Advantage For the Casino

Introducing more decks into the game increases the advantage of the casino.  For example, given similar rules, a single deck game is about 0.5%1)Check out the blackjack rule variations and odds page for details on how the number of decks and specific rules affect the house edge. better for the player compared with a 6-deck game. However, most single deck games today have worse rules for the player such as only paying 6 to 5 on a blackjack, which significantly increases the house edge.

Card counting is more difficult for many people in multi-deck games. It is important to remember that card counting in a casino is not prohibited, but the operators treat it significantly negatively.

You will notice some peculiarities when playing blackjack with multiple decks. Before moving the cards into the shoe, the dealer will cut them with a blank colored plastic card. As a result, not all of the decks are used during the game round.  The reason for this is to prevent card counters from gaining too great of an advantage near the end of the shoe.  Once the dealer reaches the cut card, the un-played cards are removed and shuffled with the cards that were already played.

How Many Decks are Used in Online Casino Blackjack

This is because casino slot developers strive to make their games authentic. That is why the number of decks is the same as in land-based casinos. In this case, the entire volume of cards in the machine is shuffled with each new distribution.  But remember, the casino edge is inherently bigger with multiple decks versus single deck even if only one round is played before shuffling.

Features Of Blackjack in a Live Casino

Players may be interested in how many decks are used in an online casino at live dealer blackjack tables. As in land-based casinos, 6 to 8 decks are usually used. This prevents the studio dealers from shuffling after each hand and dragging out the game.

Occasionally, there are tables in which only one deck is used. The main feature of such games is the presence of an automatic shuffler. While the round is being played with one deck, he shuffles the cards from the second deck, and after the end of the draw, the decks change places. How to Play Blackjack

Let’s discuss a few basic blackjack rules you should learn before starting the game.

Each card in the game has a specific value:

The basic premise of blackjack is to beat the dealer’s hand.  You do this by attempting to get to 21 without going over or by letting the dealer go over 21.  There are many options in blackjack such as standing, hitting, doubling, splitting and possibly even surrendering your hand.  In addition, some games have side-bets and variations to spice up the game.

In-game, there are several essential actions that you can take after receiving two cards in your hand.  Here are the four most common:

Blackjack is an exciting card game in which card-counting techniques are applicable.  The casino has an inherent increased advantage as more decks are used.  Online casinos and land-based gambling halls usually use 6 to 8 decks, however, some casinos will deal single-deck with restrictive rules.