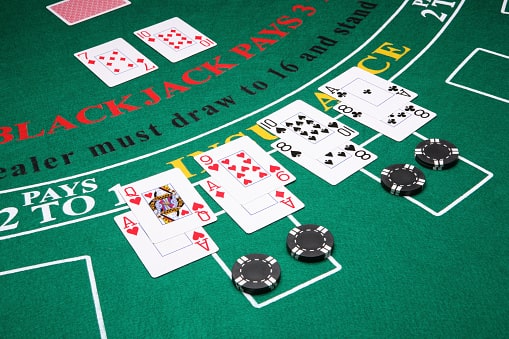 
Blackjack is one of the most popular casino games around, with millions of gambling enthusiasts regularly continuing to play the classic title.  You can play blackjack sessions virtually or physically.

One of the reasons this game has enjoyed the kind of interest it has from punters all around the world is due to the simplicity of the game. This can be in regard to the rules of the game, however, it could also be due to the fact that the blackjack table is also very simple to understand and use when playing, too.

Indeed, it is wise and perhaps very important to understand everything about the blackjack table before playing the game.  This can help to increase the chance of having a positive experience when sitting at the table.

With that in mind, this article will take a look at the design and layout of a traditional blackjack table. Whether you play online blackjack in NJ or you decide to head to a traditional Las Vegas-style casino, you will immediately know what to expect and how to utilize the table after reading this post!

The first thing that many will notice when they sit at a table specifically designed for the game of blackjack is the shape. It is typically designed to be in the shape of an oval, as this will help to sit as many players in one seating, whilst also allowing the dealer to be as accessible to everyone too.

Furthermore, at the end of the table which is flat and where the dealer will typically stand, the shoe from which the cards are dealt is placed here. The shoe is rectangular, unless it is an automatic shuffler, and has the capability of holding up to eight decks.  Of course, depending on the game of blackjack being played, there may only be one or two decks being used, in which case are typically dealt by hand.

Most tables will be covered in a felt material, which will typically either be green or red, although it should not come as a surprise if the former of the two colors were spotted more often than not. Additionally, there are spaces available on the table that are designated for each player where they are able to place their bet and show the hand that they have.

Moreover, many blackjack tables will either have a card that will highlight the rules of the game, whilst some will have it printed on the table, including payouts and whether insurance bets are possible to place.  Of course, one the most important rules to look for is whether blackjack’s pay the full 3 to 2 payoff.

Where do the players and the dealer stand and sit?

We mentioned it briefly above, however it is important to understand where players and the dealer are positioned around the table.  This can enhance the overall experience and potentially make it more positive from the beginning as it will install a sense of calmness to those who have perhaps never played before, especially when they set foot in a traditional brick-and-mortar casino.

Firstly, the players will be seated or standing alongside the curved edge of the oval-shaped table, with it is possible to have up to seven players (typically) playing at any one time. Some tables will only allow five players at one time, although this is something that is different everywhere.

The dealer will then be standing on the opposite side of the table and will be facing each bettor from the flat edge. This allows them to see each player and be able to deal effectively with the shoe that has been placed next to them.

Is there a right blackjack table?

You might be wondering whether there is a right blackjack table to choose from, however it is perhaps more of a question about the type of game you want to play rather than making sure the right type of table has been chosen.  In addition to any rules imprinted on the felt you will often see a sign at the edge of the table that reveals the minimum and maximum bets allowed and any other specific rules allowed such as when you can double and split, etc.

Different variants of the game will also have different options available, however a traditional blackjack table will generally have the same type of layout that we described above.