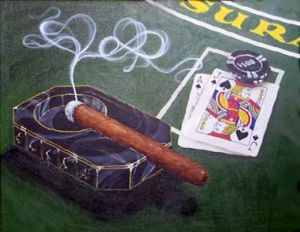 Although the primary objective of getting a 21 or as close to it as possible remains the same, the casino game of blackjack has many variations. Some of these have strikingly different rules from the standard blackjack, too.

Let’s look into the top variants in detail here and check which one(s) may be more suitable for your style. Make sure you understand the rules and changes each variation has in order to adapt your own strategy.  Percentages shown are approximate and assume blackjacks pay 3 to 2 unless otherwise noted.  Percentages will also vary depending on the number of decks used.

Undoubtedly, one of the most widely played blackjack variants in the UK, European Blackjack is a popular blackjack variant. The main difference of this variant is in the rule that the dealer does not receive his hole card till the players have made the playing decisions. European Blackjack poses more restrictions on the players too. An example is the prohibition of dealer peek or surrender. The house edge is slightly higher at 0.66% compared to the 0.4% of the standard blackjack with Soft-17 rules. Doubling is allowed on 9, 10 and 11 only. Doubling after split is allowed but re-splitting is not allowed.

Las Vegas Strip Blackjack is one of the most popular blackjack variants in Las Vegas casinos. With a lower house edge of 0.35% to 0.36%, Vegas Strip blackjack is very similar to the American blackjack rules. It stands out by virtue of its dealer peek rules as dealer peek is allowed only on ace. Additionally, doubling is allowed on any 2 cards and the dealer stands on Soft 17, like in American Blackjack. The game derives its name from where it is played, The Vegas Strip, which is basically a 4.2 mile (6.8 km) stretch of South Las Vegas Boulevard, outside the city limits.

The Spanish 21 variant of blackjack is more popular in Australia and Malaysia. It was first introduced as Pontoon in 1995. The primary difference of this variant is that it is played with 6 decks of cards and the 10s are removed from each deck. Players, after being dealt the initial two cards, continue to receive cards till they decide to Stand. Spanish 21 is a popular variant because it offers a wide range of side bets including insurance. The house edge of Spanish 21 is between 0.42% to 0.85%, depending on the number of decks and whether the dealer hits Soft-17. The variant is flexible in terms of rules and playing actions. Doubling, doubling after split and surrendering are all allowed. Re-splitting is allowed up to 4 hands including Aces.

Invented by Howard Grossman, Super Fun, as the name suggests, is a fun variant of the blackjack game. Popularized around 1999, it is widely played in live casinos or in online live dealer blackjack. The house edge of Super Fun 21 is slightly higher at 1.2% to 1.5%. However, the game variant is quite flexible in terms of rules. Doubling, doubling after split and surrendering are all allowed. Re-splitting, on the other hand, is allowed up to 4 hands including Aces. Super Fun 21 is played with 1, 2 or 6 decks of cards and dealer peek is allowed on Aces and the Face Cards.

The Double Attack Blackjack is an interesting variant of the blackjack, played in land-based casinos but not available in online casinos. The main difference of this particular blackjack variation is that it is played with 6-8 decks containing 48 cards each as the 10s are removed from the deck before the game begins. Double Attack Blackjack offers some other favorable rules for the players. For instance, there is a side bet called Bustit. Then, the insurance payout is higher than it is in standard blackjack and most importantly, the players can double the bet while seeing the dealer’s door card. The house edge of Double Attack Blackjack is about 0.62%.

Progressive Blackjack is a blackjack variant combining classic blackjack with progressive side bet options. This variant is played with 6 decks of cards, reshuffled after each round. As the side bets have a significant role to play in progressive blackjack, the game starts with a house edge of 37.94% and decreases as additional bets are placed. The rules are a bit stringent when compared to the standard blackjack. As such, in Progressive Blackjack, dealer peek, surrendering, doubling after splits are not allowed. Doubling, however, is allowed on hand totals of 9, 10 and 11. The dealer stands on Soft 17.

Blackjack Switch is a more distinctive variant with different rules and game play. This variant was created by the renowned casino games inventor, Geoff Hall. In Blackjack Switch, each individual player places a side bet, apart from two identical wagers. First, he is allowed to bet on two hands and then he can switch the second cards with one another, which is optional. Another interesting feature of this variant is that the dealer’s 22 is not a bust but a draw or push. This, however, is only when the player does not have a natural blackjack. The house edge of Blackjack Switch with an optimal strategy is about .6%. The game variant is relaxed in the sense that re-splitting is allowed up to three times for players.

Another blackjack variant invented by Geoff Hall, Free Bet Blackjack stands out with some distinctive features, very different from the everyday blackjack we all know and love. The most notable feature among these is that while splitting and doubling, the player does not need to risk his own money most of the time. Another distinct feature of the game variant is that the dealer’s 22 is considered a push instead of a bust. This rule is the same as that of Blackjack Switch. Free doubles are allowed on hard totals of two cards of 9, 10 or 11 alongside the regular ones just as free splits are allowed on pairs except 10s. The house edge of Free Bet Blackjack is between 0.6% to 1% and it is generally played with 6 decks of cards.

Face Up Blackjack, as a variant, is different from the standard blackjack in terms of the dealer’s cards. So, in Face Up Blackjack, which is also known as the Double Exposure Blackjack, both the dealer’s original cards are dealt face up. The game play and the player’s decisions obviously change based on this rule. However, most of the other rules of the variant remain the same. Doubling, splitting and surrendering are all allowed. The house edge is about 0.67%.

So, this sums up the prominent blackjack variations and their striking rules as played in different parts of the world. Some variants are more on the fun sides whilst others are very much played in high-end luxury casinos alongside standard blackjack tables.