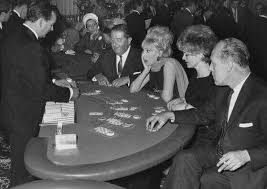 Blackjack is one of the most thrilling card games to play around the world. Many people love the simplicity of the game that still delivers a lot of tension as a card is flipped over. Here’s a look at how the much-loved game was first created and how it’s changed over the years.

Before we look back at how it’s changed over the years, it’s important to look at how big a game blackjack has become. No longer do you need to gather around a group of friends to play at home. You merely need to load up the game on your laptop or phone and you can play against the computer. You don’t even have to visit a casino hall to be able to play for cash. Websites like SBOBET allow you to play a wide range of games, like blackjack, online for the same cash prizes as you’d expect to be winning in some of the biggest casino halls in the world.

The power of the internet has increased the popularity of this game massively. This is because you no longer have to seek out a game. Instead, even the most novice of players can enjoy a game thanks to the power of technology. There are many online games and software tools that will teach you step by step how to play and can advise you of all the possibilities of your next move, meaning you can learn how to become an expert gamer in no time.

Of course, when blackjack was first invented, things were a lot different to how they are today. Nobody is quite sure when the first game of blackjack was played. The first time it was widely recognized as a game was in France during the 1700s. It’s believed the game (which they called Vingt-et-Un) became so popular in France during this time that during the reign of King Louis XV many of the royal family enjoyed playing it as a way of unwinding from their duties. Other people believe that the first game of blackjack was actually played by the Romans. Instead of the traditional playing cards, it’s thought that the game was played with pieces of wood with different numbers painted on them. No matter which explanation you believe, it’s clear that the game we all know and love is probably over 300 years old.

One of the surprising things about blackjack is that for many years it wasn’t actually called blackjack. Many people knew the game by a different name, 21, or a regional variation or translation of that same name. Instead the name was a result of a promotion that casino halls put on when the game came to America in the early 1900s.

Many halls would offer an extra prize if the player managed to make 21 by using either the jack of spades or the jack of clubs, i.e. the two black jacks in the pack. It’s believed that the nickname then stuck with the game until this present day.

One of the biggest changes to today’s game is the unfortunate proliferation of games paying only 6 to 5.  Prior to 1999, all regular blackjack games paid a natural 21 (a ten valued card and an Ace) at 3 to 2 odds.  For more information on the history of blackjack be sure to check out BlackjackHistory.com.

James Daniels is a freelance writer, business enthusiast, a bit of a tech buff, and an overall geek. He is also an avid reader, who can while away hours reading and knowing about the latest gadgets and tech, whilst offering views and opinions on these topics.