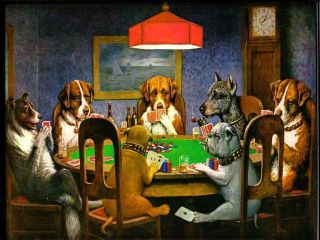 The home or private game of poker is usually played as a “dealers choice” game where each player, in his turn to deal, may play whatever game he chooses.  There may be a couple of dozen games to choose from that are played in any given home game.

There are distinct differences such as how the games are structured for betting purposes and for resolving who wins the pot.  In casino poker hands are resolved under the “cards speak” rule.  After all cards have been dealt and bets made, players merely turn their hand over and the dealer announces the winner or winners in the case of a split pot.

In the private game, however, lots of players tend to use the simultaneous declaration method to determine the winners of the hand.  That is, each player places his hands on the table.  on the count of three, everyone opens one hand.  If you show a chip in your hand this signifies you are going for the high half of the pot.  If you are going low, you open an empty hand.  If you choose to go both ways, you open both hands.  Now, there are other ways of declaring… this is just one example.  There are also several ways of resolving ties in the case of a player going both ways.  In some games you loose everything if you are tied or beaten either way, and others allow you to tie and three quarter an opponent.1)A very good discussion of these rules can be found in the High-Low Split chapter of Doyle Brunson’s Super System written by David Sklansky.

“Just as ‘Caddy Blackjack’ differs
from the way it’s played in the
casino, so can the home game of poker.”

Casino poker is played in a poker room where one specific game is played at each table.  The players at the table can’t choose to play a different game than the one being spread.  For instance if you are sitting at a table where 7 card stud is being dealt, and you wish to play some Omaha hi-lo 8 or better, you will have to find a table where that game is being spread.

As you can see, once you seat yourself at the game of your choice in the casino you are going to play that game until you change tables.  In the private game you are going to be faced with playing different games every hand.  In my opinion you must be a much more rounded player than in the casino game if you expect to be a steady winner and supplement your income from poker.   There are many other things that you must concentrate on in the private game.  Some people play that 6,4,3,2,A2)Also known as a 6-4 low. is the best low and on the very next hand the dealer may announce 5,4,3,2,A3)Also known as the “wheel”. is the best low.

Now, many people will establish strict rules as far as what is the best low.  I say let them announce whatever they wish!  I can make a lot more money from players mistakes, because between hands as the dealer is announcing his game there are always people talking with one another or just not paying attention.  They are playing a hand thinking 6,4,3,2,A is the best when a wheel has been announced as the best low.  Instead of winning only the high side, I can scoop the whole pot by declaring both ways.

I approach a poker game in a different manner than a lot of other folks do.  I hear people say they are there for a night out and a good time cause they like to play poker.  If they win fine.  I like that type of attitude, it’s just one that I don’t share.  To me, poker is hard work, as I try to play my best game at all times.  I am always looking to collect as many chips as I can squeeze out of each hand I am involved in.  I am always up to the challenge when I sit down in any game.  I’m there to make the money.  If I have a good time in the process, all the better!

I do play poker in casinos, but I prefer to play in private games because I usually play in games where I know everyone and their style of play.  I can find a game every night of the week if I want to play, and never have to drive more than 10 miles.

I play in a game every week that has been going on since 1981.  Except for myself and one other person, the faces at the table have changed many times.  To play in this game a person has to be recommended by one of the other players.  He is told before he comes to play that we are not looking for a one time player.  He has to be committed to setting that night aside each week to play the game.  He or she is also told of the financial risk involved so they aren’t surprised by coming with a short bankroll.  After the first night of play that person is voted in or out of the game by all of the other players.  This game won’t even accept a replacement if a person is ill.  They just play short handed.  It takes too much time to explain all the rules, etc., for the game to run smooth.

The game runs from 6pm to midnight.  No one comes late or leaves early.  Your bankroll is at risk for 6 hours in this game.  We start the deal with the same person each week, and at midnight we end with the person seated to the right of the person who dealt the first hand, so everyone deals the same number of hands.

I don’t know why, but most people that play poker, men especially, tend to have big egos.  Most men think they are good poker players.  Just ask them!  I’ve seen new players in the game try to run over a couple of our female players only to be sucked-in, outwitted and trounced by superior play.  Some of the people in this game play three or four days a week, and have years of experience.

One play comes to mind.  The game is 5 card stud hi-low declare with one re-buy.  The game is 8 handed.  Six people call the first bet.  Cards are dealt, betting and raising brings it to 5 handed.  Again the cards are dealt.  A player with a queen showing bets and is raised by Mr. Ego, who shows a K,10,7 and is re-raised by our Lady who shows A,4,7.  Everyone calls.  On the last up card the player with the queen catches a blank.  Ditto for Mr. Ego, and the other two.  Our lady who is dealing catches another Ace.  She bets, everyone folds except Mr. Ego.  Now its time for the re-buy. He buys, throws away the 7 and catches another blank.  She throws her chips in for the re-buy, tosses one of the Aces and draws a 6!  He starts raving about why she threw a sure winner for half the pot away.  They declare.  They both declare high!  Mr. Ego turns over a king for a pair, as our Lady turns over an Ace, scoops the pot, and says “I’d much rather win the whole pot than half of it!!”  That’s right, she threw trips away.

Yancy Howard is the pseudonym for Dick Buechler – a successful poker player and blackjack card counter originally from Salem, New Jersey.  He comments that he learned about advantage play in the United States Marines where he was a Gunnery Sergeant during the Vietnam war era.  A former professional Heliarc (TIG) Welder and instructor, he now enjoys traveling the world in his retirement.