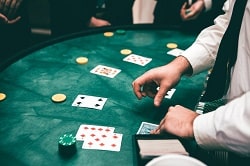 Blackjack has been one of the most enduring casino games ever invented. Instead of being overshadowed by high-tech games in the online casino era, it has continued to reign supreme. Blackjack is popular because it is easy to learn, but players can gain a level of mastery which can improve their chances of winning. Scandinavia is a growing sector for the gambling industry, with a lot of developers targeting players there. The fact that blackjack is still the most played table game at their online casinos suggests that the classic card game will carry on going strong for many years.

There are various casino portals in Scandinavia which recommend the best sites to play at in terms of bonuses and what games are on offer. Comparison sites such as these tend to advertise what the majority of players are looking for, and the fact that there is a heavy focus on blackjack shows how popular the game is in the region. Some review sites put people’s enduring love for the game down to its simplicity. The rules of the game are described by norgecasino.com in 9 steps, outlining just how easy it is for anyone to play the game with minimal knowledge.

Online casinos in Scandinavia aim to attract players by offering deposit match bonuses. This free money can be used to play table games, with blackjack being one of the most commonly played offerings. Judging by some of the other bonuses, slots are also hugely popular in the region. Many of the sites that aim to bring in Scandinavian players have free spins bonuses along with the deposit matches.

NetEnt is one of the biggest developers in the business, and the dominant studio is from Sweden. The rise of the company which creates online casino software has helped draw more attention to the growing market in the region. The company, which has developed technology for the industry since 1996, has recently stated that one of its main focuses moving forward in 2020 will be to improve its live casino offerings. This includes live links to blackjack games with real dealers, which are designed to bring the real-world casino experience to players in their own homes.

Sweden has been ahead of the times in Scandinavia when it comes to legislation, and has been the most open of the countries in the region when it comes to gambling online. But in Norway and Finland, the legalities surrounding online gaming have been slightly stricter. Laws are becoming less stringent, though, as the governments have realized that a large section of the population want to play at online casinos. This is another reason why developers are targeting players in the region with their offerings.

The fact that live casino developments are the main focus for casino software developers shows just how popular blackjack is in Scandinavia. With there being few actual land-based casinos, players need to get their fix by playing online. Blackjack is the most popular table game due to its simplicity, but also because it is one of the most exciting offerings to play.